The Getting More Model

The new, highly collaborative model of human interaction improves life any area: in business, on the job, with kids and partners, while traveling or shopping, and all of life’s endeavors. “Life-changing,” and, "Made me a better parent," both common refrains.

Most people are not as successful, happy or persuasive as they wish because they have received bad advice since they were children on how to deal with others. Power. Leverage. Logic. Threats. Walking Out. Win-Win. Saying you have another offer. This advice is based on impersonal law and economics principles developed over 40 years ago. If you think that’s OK, try getting through the day in our fast-changing world with 40-year-old tools like a manual typewriter or rotary phone.

The Getting More model of human interaction has been developed with much more realistic, practical and recent methods of human psychology. Emotional intelligence. Cultural diversity. Understanding and valuing the other party’s perceptions, that is, the pictures in their heads. And it generates four times as much value – twice as many deals, and each deal gets twice as much. It’s an information collection system about the human psyche; the outcome is far better results for all parties. In addition to being persistently collaborative, it’s persistently fair.

The innovative Getting More model is gaining considerable traction around the world. Thousands of employees at major Silicon Valley companies been trained in the model and have brought in billions of dollars in extra revenues. U.S. Special Operations, the military elite, says that the model is saving lives. Job seekers have gotten more jobs and raises. Millions of discounts have resulted. And legions of parents have gotten their kids to go to bed on time or otherwise listen. All of them get through the day now with more confidence and calm.

1. Goals are paramount.
Goals are what you want at the end of the negotiation that you don’t have at the beginning. Anything you do in a negotiation should explicitly bring you closer to your goals for that particular negotiation.
2. It's about them
Think of yourself as the least important person in the negotiation. You can’t persuade people of anything unless you know the pictures in their heads: their perceptions, sensibilities, needs, etc.
3. Make emotional payments.
Tap into the other person's emotional psyche with empathy or simply by valuing them.
4. Every situation is different.
In negotiation, there is no one-size-fits-all.
5. Incremental is best.
Take small steps, whether you are trying for raises or treaties. Move slowly toward each other, narrowing the gap incrementally.
6. Trade things you value unequally.
All people value things unequally. Find out what each party cares and doesn’t care about.
7. Find their standards
What are their policies, exceptions to policies, precedents, past statements, ways they make decisions?
8. Be transparent and constructive, not manipulative.
This is one of the biggest differences between the Getting More Model and the conventional knowledge. Don’t deceive people. Being real is highly credible, and credibility is your biggest asset.

9. Always communicate, state the obvious, and frame the vision.
Bad communication, or none at all, causes most failed negotiations.
10. Find the real problem and make it an opportunity.
To find the real problem, you have to find out why the other party is acting the way they are.
11. Embrace Differences
Most people think different is worse, risky, annoying, uncomfortable. But different is actually demonstrably better: more profitable, more creative.
12. Prepare – Make a list and practice.

Think of yourself as the least important person in the negotiation. Even with hard bargainers, it has to begin with their feelings and perceptions, their sensibilities. 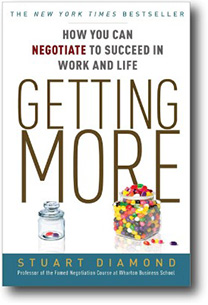 An introduction to Getting More

GETTING MORE, a NY Times Bestseller, #1 Wall Street Journal and USA Today Business Bestseller, has sold more than 1.3 million copies and had life-changing results for people from all walks of life. “The conventional wisdom of power, logic and even win-win is based on ideas that are now more than 40 years old and capture only 25 percent of the potential value,” according to author Prof. Stuart Diamond. The book is based on a new method of human interaction researched over 25 years with 30,000 people in more than 50 countries.